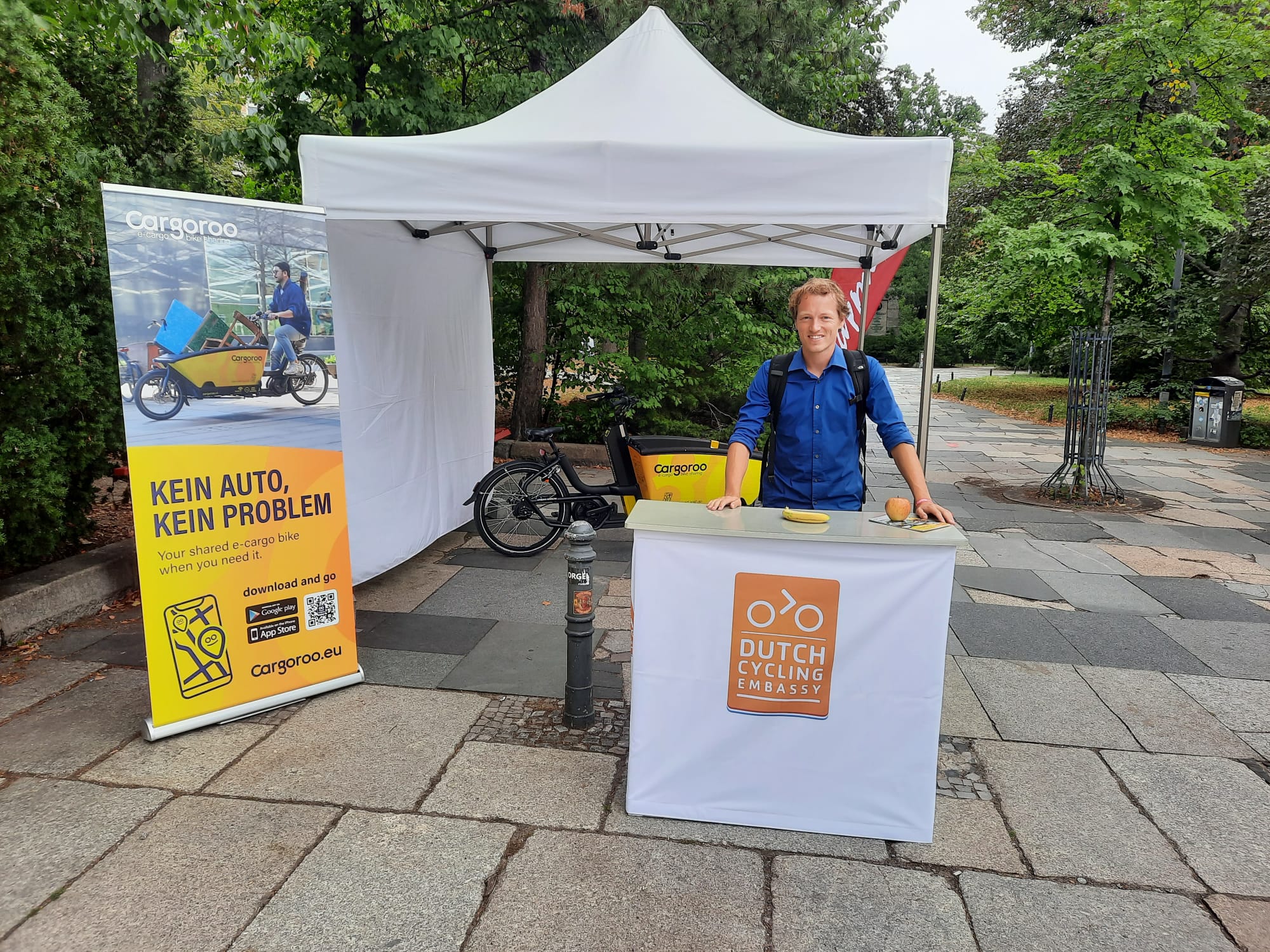 Which ingredients are needed to absorb as many concepts for the mobility of the future as possible in the shortest time? The recipe for the Future Mobility Summit (FMS) sounds simple: take top-class guests from politics, industry and science and bring them together in a very confined space.

On September 7 and 8, the Future Mobility Summit 2022 was organized at TU Berlin. With speakers on a variety of topics related to future mobility, partial sessions and workshops in which innovative ideas were discussed and pitches in which the audience looked ahead to 2030 and beyond. The Dutch Cycling Embassy participated in the Summit and organized a number of sessions in cooperation with the Dutch Embassy, the Ministry of Infrastructure and Water Management, and APPM.

On the first day of the Summit, the 9-euro ticket (unlimited travel in the summer of 2022 by train across Germany for 9 euros) dominated much of the plenary program. “The 9-euro-ticket has shown us that an affordable public transport system for everyone is an important pillar for sustainable mobility” was one of the conclusions of Bettina Jarasch (Senator Berlin Mobility).

After this kickoff, the first rounds of workshops were organized. During Hub Deutschland Hub, APPM zoomed in on the future of hubs in a mobility network, and the opportunities this offers to relieve inner cities from traffic congestion. Followed by a panel discussion on active mobility, where Arlette van Gilst (Ministry of Infrastructure and Water Management) and David Gelauff (Municipality of Amsterdam), among others, put forward the bicycle as the most important means of transportation of the future. And this at an event where the expectation might have been that flying cars and drones were top of mind, but that turned out not to be the case. By many speakers and in many discussions, the bicycle was mentioned as very important and dominant, the way to move sustainably into the future.

Day 1 ended with a discussion at the Netherlands Embassy, attended by a large Dutch delegation, but also many interested Germans who tried to make useful contacts and discover the Dutch vision. A very successful networking event to share knowledge in an informal way and work together towards a sustainable future.

The second day of the Future Mobility Summit was mainly about charging infrastructure (where cargo bikes were also frequently in the picture) and effective work and action. An excellent presentation by Jaron Borensztajn, co-founder of Cargoroo, steered the discussion on how many vans could disappear from the city if these, and similar, cargo bikes could be used in large numbers for urban logistics transport.

In the subsequent Workshop on Active Mobility: How to get from plans to reality faster, pitches and discussion focused on examples from both Germany and the Netherlands, where collaboration and bottom-up action can lead to innovation and development in cities. The DCE (Arjen Klinkenberg) presented the idea of bicycle decks, originally an invention of the City of Rotterdam, but now visible all over the world. Birgit Cannegieter (Tour de Force/APPM) presented the success of the cooperation of cycling parties within Tour de Force, and David Gelauff (Municipality of Amsterdam) looked at how the enormous bicycle congestion in the city can also offer sufficient opportunities, if only you pay sufficient attention to this as a municipality. A very successful workshop, offering every participant more insight into possibilities to contribute to a more liveable city with simple, cheap and quick actions.

The session ended with a networking lunch by DCE, Ministry of Infrastructure and Water Management and APPM, to once again expand contacts and network and to emphasize that with cooperation we can make bigger and bigger steps. The latest innovative and novel ideas from this Future Mobility Summit were presented during the raving Innovators Pitch, where a range of speakers were able to present their innovation. From the DCE network, Cargoroo and on behalf of MobilityLabel Max Mooij appeared on stage for a very well-appreciated talk and hopefully some new contacts for future cooperation.

All in all, we can look back on a great Summit, with the focus that the DCE has placed on Germany over the past year proving to be entirely justified. There are plenty of challenges and opportunities, and there is very much a need for international cooperation between Germany and the Netherlands. Plenty of opportunities for the sustainable future!