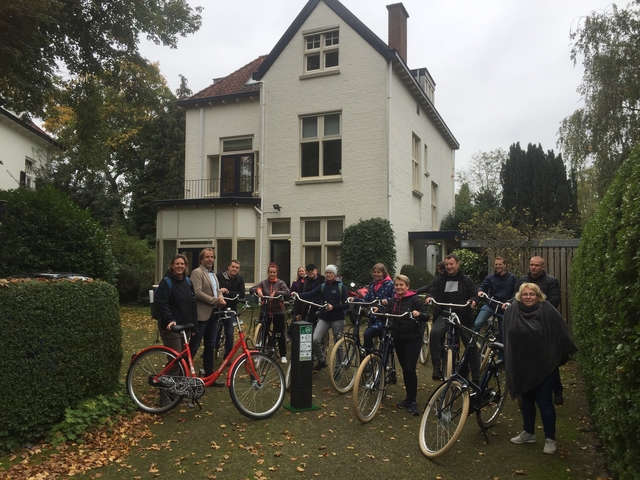 The Dutch Cycling Embassy arranged a program for the two-day visit of a Polish-German delegation of the ODER VELO project in the Lubuskie border region.

Lubuskie is a border region in Western Poland and the visitors are realising the INTERREG cross-border project “ODER VELO”. It will focus on mapping the cycling routes and paths used for the tourism purposes on both side of the border, creating a common inventory and conception – document which will be the base to further use for local authorities in both regions to plan and build cycling paths – to do it in coherent and integrated way. The project foresees also to create the mobile app for the end-users of those routes – mainly tourists, as our cross-border area is characterized by numerous forest, lakes and a national park and of course Odra river as the natural border.

At the first day in Amersfoort, the delegation was informed about the Knooppunten-netwerk of the Landelijk Fietsplatform, by director Eric Nijland and about the signing of routes by Sjoerd Zuidema (Folkersma). After the interesting morning part, they went out for a bike ride guided by Jocelyn Kemker-de Kruif of TripleJoy in the surroundings of Amersfoort. The second day, the delegation was hosted by the local office of the Fietsersbond Amsterdam. Near to the Vondelpark, presentations were done by Richard Valkering (Fietsersbond Routeplanner) and Hans Voerknecht, about the integration of cycling in urban mobility. Mobycon’s Jason Colbeck and Fabio Neijts led te group through the city of Amsterdam with a walking tour, from the Vondelpark to the inner city. It was an exhausting and impressive experience, to realise the very important roll of the bikes in Amsterdam, and the possible clashes between cyclists, pedestrians, and motorized vehicles. After all, the Polish-German delegation went home with a lot of new knowledge and experiences, to better their work in the ODER VELO project.