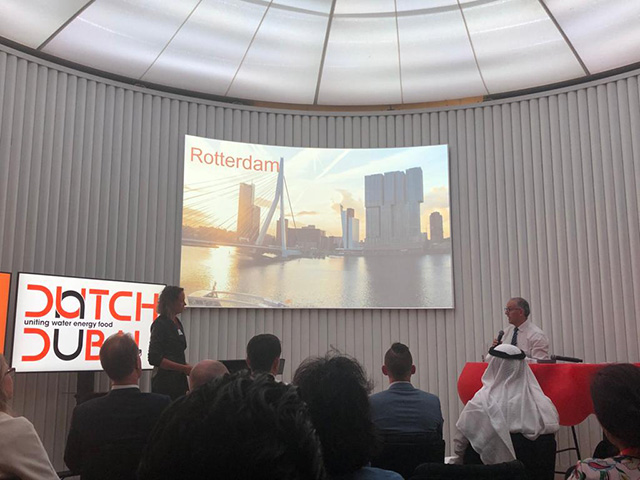 As part of #UNWorldCitiesDay, he joined the event “Co-creating Future Cities” organized by Rijksdienst voor Ondernemend Nederland (RVO) and moderated the round table discussion ”Unleashing the Potential of Smart Green Mobility for Climate Resilient and Adaptive Cities”.

In addition to exploring various international leads, we also discussed the bold ambitions of the Municipality of Dubai to boost cycling conditions in the region. This is largely for short trips and as access and egress mode travelling to and from metro stations. The major challenge is offering shade and coolness in a sustainable and environmental friendly manner.

The DCE also joined the #DutchResilienceHub event organized by NWP (Netherlands Water Partnership) and moderated by Bianca Nijhof. The event was full of inspirational speeches from various mayors, including Mayor Ahmed Aboutaleb from Rotterdam, who emphasized the importance of cities in the battle against climate change; he underlined that cities should be at the frontlines of the transition in “leading by doing”. Mayor Erion Veliaj from Tirana resonated a hopeful and powerful message that highlights cycling as an easy and highly rewarding opportunity; as a smart tool to transition towards more liveable cities in times of unprecedented climate challenges.