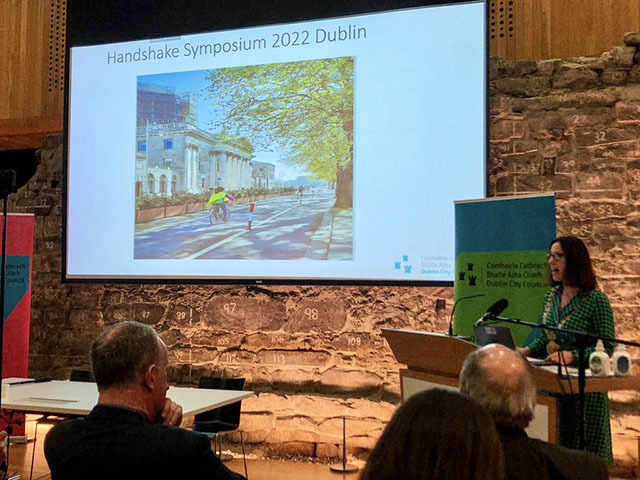 The Dutch Cycling Embassy joins the City of Amsterdam at a Handshake Project Symposium in the Irish capital.

From March 22nd to 25th, Dutch Cycling Embassy Marketing and Communication Manager Chris Bruntlett joined a delegation from the City of Amsterdam for a cycling symposium in Dublin, Ireland. The event was organized as part of the EU-funded CIVITAS Handshake Project, through which “Cycling Capital” Amsterdam mentors several “Future Cycling Capitals”, including Dublin.

Following an opening address from Lord Mayor Alison Gilliland, speakers from the Municipalities of Amsterdam and Dublin provided an overview of the progress and current challenges in the Irish capital. Over the following days, multiple sessions focused on topics such as engaging with elected officials, effective communications and messaging, successful technical route design, and finding allies in the business community. The symposium also featured a public screening of the documentary film “Together We Cycle”, which included a panel discussion with several local and Dutch experts. You can watch highlights from the symposium on Dublin City Council’s YouTube channel.

All in the all, the exchange was deemed a remarkable success, and plans are already being hatched to bring the Lord Mayor and 15-20 councillors to Amsterdam for a return study visit.