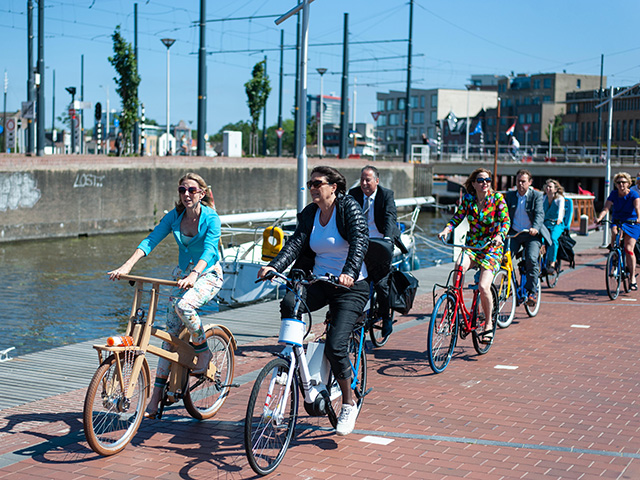 EU Commissioner for Transport in Delft

The Commissioner, who was in town to view the prototype Hyperloop pod being developed at TU Delft, specifically asked to get on a bicycle during her time here. So in response, a larger cycling-themed tour was created, in order to show off the best of our small cycling city!

After visits to a solar e-bike charging (and parking) station on the TU Delft campus, the group cycled up to Delft Station to meet ProRail COO John Voppen, and tour the impressive bike parking facility underneath the train station, which has space for over 5,000 bicycles.

The next stop was at DCE network participant Mobycon, where their employees pitched a bike-sharing concept they are exploring with ProRail. With the working title “Wisselfiets”, the scheme hopes to make the bike-train combination even more reliable and efficient.

Lastly, the group made their way to the Dutch Cycling Embassy, where Marketing Manager Chris Bruntlett greeted them, and explained a bit about the organization. The concept of cycle logistics was introduced by Fietsdiensten’s Jos Sluijsmans, who had two cargo bikes—from Velove and Urban Arrow—available for the Commissioner to inspect and test drive.

We were thrilled to welcome such a high-level delegation to Delft, and hope the Netherlands can continue to play a leadership role in making the EU a better place to cycle!