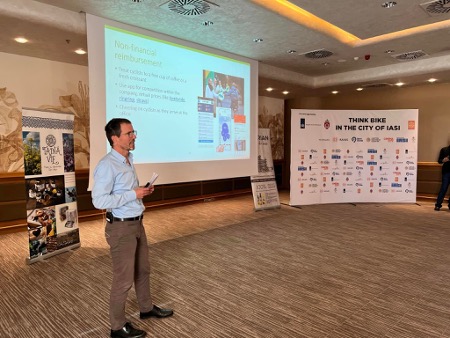 On 11 October a bike2work workshop took place in the city of Iasi in Romania. Iași is the second largest city in Romania with a population of about a half million. Located in the historical region of Moldavia, it has traditionally been one of the leading centres of Romanian social, cultural, academic and artistic life. Iași is also the main business centre of Romania’s Moldavian region with branches of several multinationals.

Iasi residents only cycle recreationally. There is little utilitarian cycling in Iasi. The car is very dominant and bike lanes are absent along most roads.  The local cycling community is trying to change this. Costi Andriescu is the founder of the local “Iasi, the city of bicycles” project and the local cycling community. He initiated this bike2work workshop and the Dutch Embassy in Romania facilitated.

The event was opened by the deputy mayor of Iasi Daniel Juravle and the Dutch consul in Romania, Janette Verrijzer. After the opening Dutch cycling expert Roel Lenoir presented some history and numbers on cycling to work in the Netherlands. He showed that cycling to work was very big in the 1950’s and 1960’s and hit rock bottom in the ‘70’s, also in the Netherlands. Since then, cycling to work has regained some ground, but there is still work to do. After his presentation, Roel set to work with the participants to create their own bike2work plan. A theoretical framework on behavioural change and examples of bike2work plans of other employers helped the participants to choose their own bike2work interventions like reimbursement, better cycling facilities, a bike2work campaign or using senior management as role models. Participants were HR representatives of 16 employers like Amazon, Centric, Visma, Levi nine and Julius and representatives of the Municipality of Iasi and several local NGO’s.

The workshop ended with a screening of the Dutch documentary Why We Cycle.