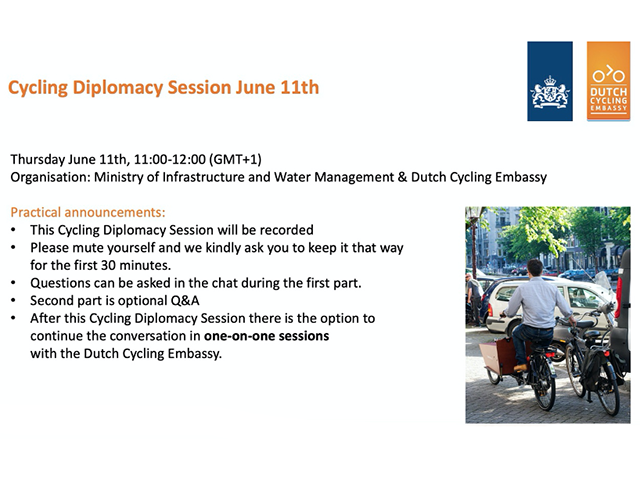 Over the past months, the corona crisis has turned out to be a true catalyst for cycling worldwide. With huge budgets assigned to walking and cycling, the momentum for cycling has arrived. Since many Dutch Embassies and Consulates recognize this momentum, but miss a clear understanding of the cycling expertise which the Netherlands has to offer, we offered a series of webinars to their personnel.

Over the course of four separate but similar webinars of half an hour each, the Dutch cycling sector presented themselves towards Dutch diplomats worldwide. The sessions started with a brief overview of the study into cycling potential, which was conducted by the Dutch Ministry of Infrastructure and Water Management. After that, the DCE briefly introduced themselves, followed by three pitches by experts from the DCE network that showcased their international work. The sessions were concluded by an overview from an expert working at a Dutch Embassy who has positive experiences with promoting cycling.

The series of sessions drew the attention of a stunning 100 experts working worldwide on behalf of the Netherlands. The sessions allows these participants to seize the momentum for cycling and use the bicycle as conversation starter and dealmaker with their governmental relations.

We are very pleased with the enormous positive response we’ve received and look forward to future collaborations with the embassy-network around the world.