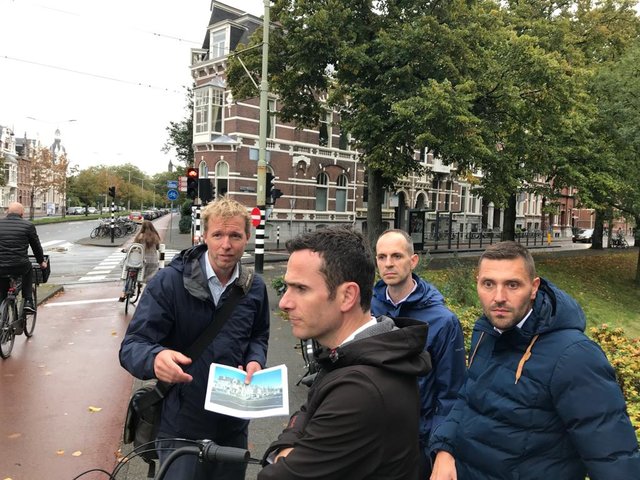 UK Transport delegation in The Hague

UK’s department of Transport learns about cycling with The Dutch Cycling Embassy and his members.

The UK department of Transport visited The Hague on Thursday the 26th of September to see how this Dutch city implements the bicycle in their transport vision. Arlette van Gilst, Wendy Engelberts and Bert Zinn of the Dutch Ministry of Infrastructure and Water explained them about the national cycling policy and strategy, the program To pedal through (in Dutch: ‘Doortrappen’) and the latest developments on cycling in The Netherlands. Wim Bot of de Fietsersbond talked about the history of cycling in Holland, Erik Tetteroo of APPMexplained them about the second stage of the national bicycle agenda named Tour de Force whereafter Lucas Harms, director of The Dutch Cycling Embassy, presented the way of international exchange of cycling knowledge.

Afterwards, the experts took the delegation out for a bike tour through The Hague with a diverse set of pictures that showed how The Hague was before the cycling revolution in Holland.