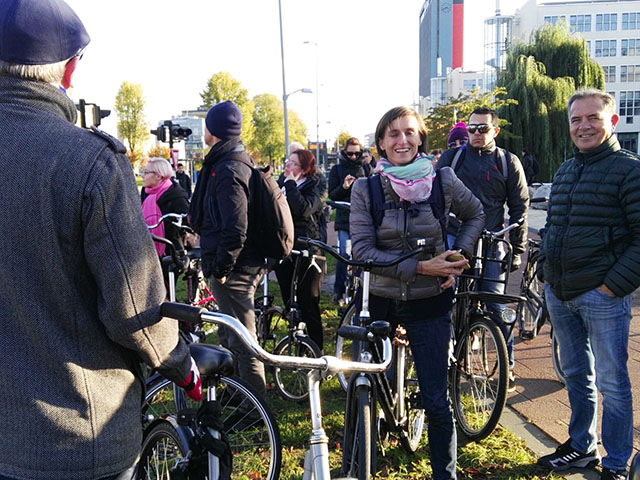 The CYCLEWALK Project aims to support the shift from car usage to cycling and walking mobility patterns over shorter distances, improving the accessibility for pedestrians and cyclists. The five year partnership is composed by six partners from five European countries: Romania, Italy, Slovenia, Lithuania, and Austria.

On Tuesday, October 29th, about 30 participants—including Settimo Nizzi, the Mayor of Olbia, Italy—gathered at the Dutch Cycling Embassy in Delft for a full day of programming, including a series of morning plenary sessions and a brief morning ride with Lennard Nout from Mobycon for a part of the delegation. The afternoon consisted of a three-hour bike tour of Delft, led by DCE’s Herbert Tiemens and Chris Bruntlett. Highlights included witnessing the school pick-up in the suburb of Delfgauw, and the evening rush hour on the TU Delft Campus.

The group officially concluded the first phase of the project at the Cycling Research Board Conference, where the latest in academic research was presented and disseminated. We will continue to work with their Netherlands advisory partner, the University of Amsterdam’s Urban Cycling Institute, in helping them bring the best Dutch knowledge, experience, and inspiration back to their communities.