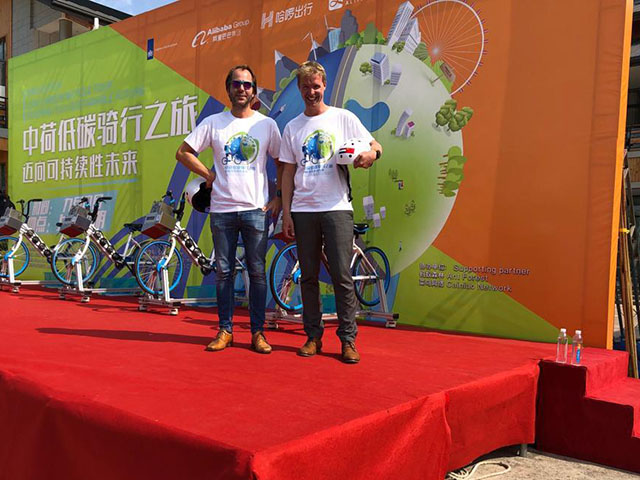 The Evolution of Bike Sharing in China

Over the weekend of September 7th and 8th, 2019, Paul Hoffschult from 3pm and Lucas Harms from the Dutch Cycling Embassy visited Shanghai, China.

They were invited by the Netherlands’ Consulate in Shanghai and HelloGlobal, a bike sharing operator which started in China in 2016, and currently provides over 20 million daily rides for 260 million users in 360 Chinese cities. They are expected to grow considerably in the years ahead, and are also looking to expand to other Asian countries (and possibly Europe).

On Saturday, we exchanged knowledge and expertise in the HelloGlobal headquarters, and afterwards used their bicycles for a tour through the city (including a brand new e-bike, which was surprisingly comfortable). Bike sharing in China is entering a second phase, after the unsuccessful trials a couple of years ago by investors like Ofo, which resulted in massive bike-share “graveyards” due to poor quality and operational management. After serious improvements, the popularity of the (bike) sharing system is expanding every day, with more citizens getting easy access at more and more locations (including subway and transit stations) for limited prices (and payments via QR-codes facilitated by AliPay).

On Sunday we were part of a mass bike parade on an island in the vicinity of Shanghai and afterwards we presented our Dutch cycling culture and our Dutch cycling expertise and experience in a seminar, co-hosted by the Dutch Consul Remco van Wijngaarden.

For a photo gallery of our time in Shanghai, please click here.

Are you interested in learning what the Dutch Cycling Embassy can do for your city? Please contact us via this page.