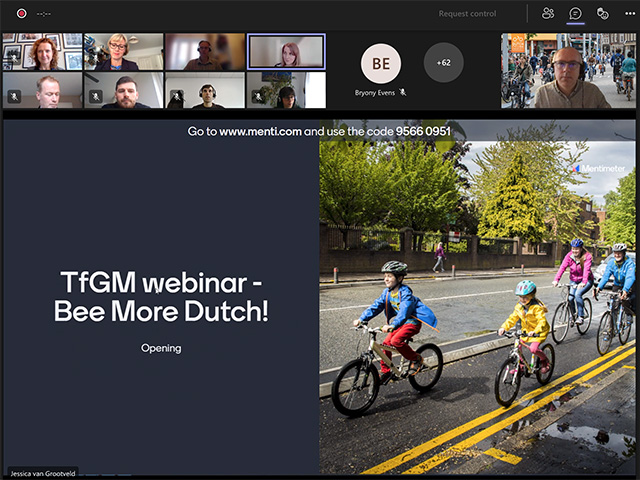 With 2021 as the ‘year of delivery’ in the development of the Greater Manchester Active Travel Network, nearly 200 staff members are focused on the continuous improvement of this project delivery process, especially on getting the details right and engaging with communities. To support them in this important process, on November 16th, the Dutch Cycling Embassy teamed up with the Embassy of the Netherlands in London and Transport for Greater Manchester (TfGM) to host a two-hour digital workshop entitled “Bee More Dutch”. The session began with welcoming remarks from Tessel van Essen, Senior Commercial Attaché at the Embassy of the Kingdom of the Netherlands, and Richard Nickson, TfGM’s Programme Director for Cycling and Walking. From there, the 75 or so attendees joined one of three themed breakout sessions, each looking at specific case study projects in the Greater Manchester area:

3. Putting People First on the High Street: Looking at Ways of Creating High Streets Which Are Designed Primarily for People Using Active Modes of Travel, and in Doing So Supporting Vibrant Local Centres and Strong Local Economies (Vinu).

After reconvening as a larger group, the final half-hour was spent sharing key takeaways from the three breakout sessions, identifying areas about which attendees would like to learn more, and having a detailed discussion with the Dutch experts. We look forward to watching the resulting projects become part of everyday life for the residents of Manchester, as they transition to a sustainable transport system in the months and years ahead.