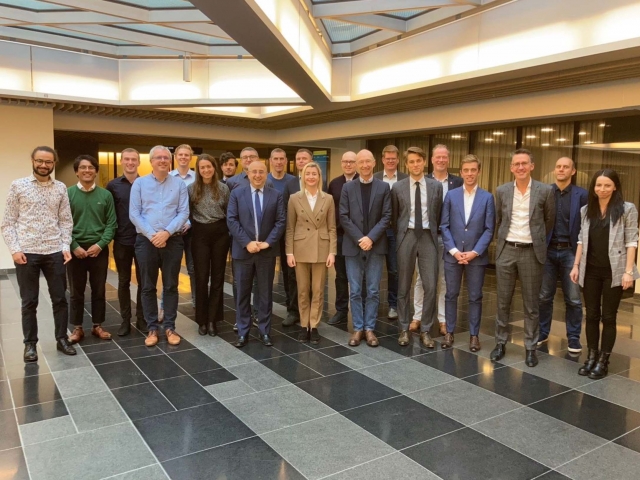 The first day started with several presentations by Dutch experts. Geertje Hegeman, head of unit road safety at Ministery of Infrastructure and Water Management, opened the meeting by emphasizing the importance of road safety. Then, Chris Bruntlett gave an introduction to the Dutch Cycling Embassy and how we can help Lithuania become more bicycle-friendly.

To give an impression of the Lithuanian context, Evaldas Morkūnas, of the Transport Competence Agency introduced what has been done in Lithuania and what they see as the next steps to become a cycling country. Sjors van Duren, Royal HaskoningDHV, presented what countries can learn about Dutch cycling and how to bring about the right message. Network development is one of the first things that you have to keep in mind when you think about safety. You separate the cyclists from the biggest dangers (cars). Ruben Loendersloot, Loendersloot Group, emphasized the fact that other countries should be inspired by the Netherlands; however, they should not copy Dutch policy. Every country has its own context, and different policies work in different countries. Cycling is about being happy, creating a livable city and much more.

After this highly informative meeting, we stepped on our bikes for a cycle tour through The Hague. We stopped at interesting points to discuss how cyclists in traffic are prioritized by Dutch design principles.

We started the second day with a welcome & presentation from Hillie Talens, a project manager at CROW, a non-profit agency that creates publications on bicycle transportation planning and engineering in the Netherlands. Hillie spoke on the classification of bicycle paths according to speed for safety reasons in the Netherlands. Afterward, Eric van Dijk from the Province of Utrecht gave a presentation about the dutch method of governance within the province and their municipalities. The discussions ended with Josine Reijnhoudt & Martijn Dijkhof from the City of Utrecht, speaking on Utrechts fast growth and their vision for the city to accept the new growth. They have created a new mobility plan for 2040, which includes them being a 10-minute city!

The study tour ended with a walking tour of Utrecht’s central stations’ bicycle parking inside and outside to understand the complex infrastructure and planning to achieve such an amazing piece of bicycle infrastructure.

We are very excited to see what Lithuania we built in their cities, and we can’t wait to have them back!