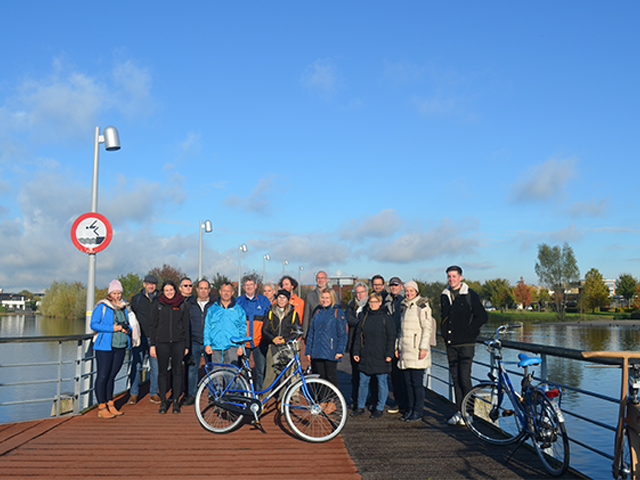 Dutch Cycling Embassy leads a Hungarian delegation into the cycling culture of Utrecht, Houten, and Amsterdam.

In an effort to boost bicycle polices and infrastructure in Hungary, a government delegation visited the Netherlands last 3, 4, and 5 of November. The delegation included mayors from various municipalities, members from the Centre for Development of Active and Ecotourism, the Ministry of Innovation and Technology, chief architects and planners from Budapest’s districts, and prime minister’s advisors.In order to cover a variety of topics such as public policy for cycling, city planning, parking facilities, infrastructure, and transport multimodality, the Dutch Cycling Embassy organized a series of lectures and bike tours guided for experts. Herbert Tiemens, from the municipality of Utrecht, opened the session with a presentation on Policy, rules, and enforcement. André Pettinga, from Cyclemotions, introduce the city of Utrecht and its mobility and network changes through historical cartography. Later, he led the bicycle tour through Utrecht.

The second day, the municipality of Houten welcomed the DCE and the Hungarian delegation. The session was introduced by Gilbert Isabella, the city mayor, and André Botermans, International Cycling Policy Ambassador, who also guided the bike tour through Houten. Ton Kooymans, from Street Stuff!, gave a lecture about bicycle parking facilities.
The last day of the visit had place in Amsterdam. Eric Nijland, expert from Fietsplatform, gave a presentation on Cycling Networks, commutes a recreational cycling. Erik Tetteroo, from HODworks, focused on Cycling Infrastructure and city planning. He finished the visit guiding the delegation in a bike tour through the East and Center of Amsterdam.
The Hungarian delegation was a highly enthusiast group. We look forward to keep working with them on their future cycling plans!