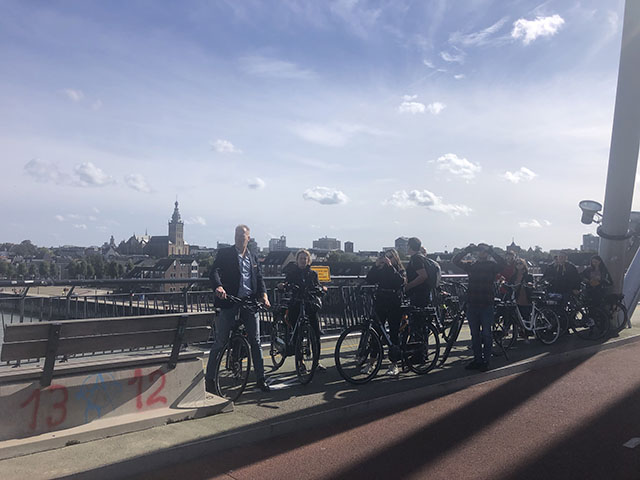 Study tour for the City of Gdańsk

On September 27 and 28th, a delegation from the City of Gdańsk visited three different cities in the Netherlands.

The visit on the first day was organized by the City of Utrecht and started with a bike tour to visit iconic spots. Where we toured the world’s largest bicycle parking, living streets (woonerfs), bike streets where the car is guest (Fietsstraat, auto te gast) and analyzed how schools integrate with bicycle infrastructure. The group had lunch discussing Dutch traffic policy, followed by a bike tour in Houten, famous for its urban design. Next, we tour the cauliflower neighbourhood, a traffic circulation plan that makes Houten one of the safest child-friendly cities in the Netherlands.

The second day started with a presentation of Ruben Loendersloot in Nijmegen. After the presentation, we went on a cycle tour to experience the theory Ruben explained in practice. During the tour, we visited several bike parking to examine the differences in needs, costs and design. Thereby, we crossed the famous bridge that connects the city center of Nijmegen with the newly developed suburb Lent. This bridge is part of the cycle highway between Arnhem and Nijmegen, the Rijn-Waalpad.