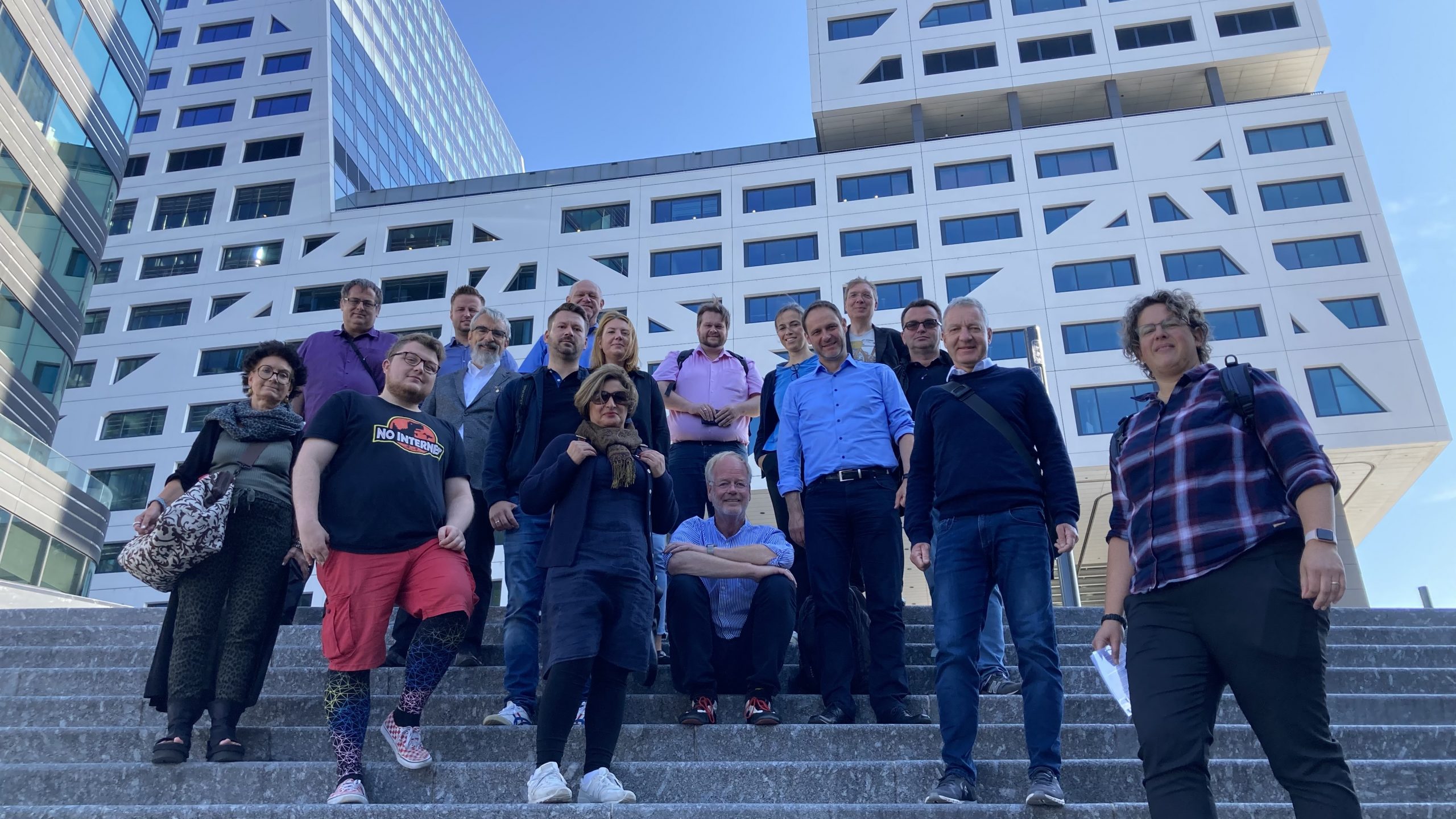 Study Tour with Delegation from Hannover

Studytour Utrecht, 03.09.2022, Delegation from Hannover
Last Saturday, a delegation from the German city of Hannover visited Utrecht as part of their study visit to the Netherlands to learn more about the urban developments the city has witnessed.

Study tour Utrecht
On their way back from Rotterdam where they met with urban planners and city officials, the group consisting of local politicians and employees of the city in the planning department went on a two-hour walking tour facilitated by Jocelyn Kemker from triple Joy and Dutch Cycling Embassy’s Nils Steinhauser.

Croeselaan area
Starting at the city hall right next to the central station, the first stop was at the Croeselaan, a street that has been transformed from a four-lane road into a small road along a park and cut off to create a square in front of the central station. Creating space for a wide cycle path and greenery, the reduction of the speed limit to 30km/h and making it a dead end resulted in reduced noise and emissions. The Sustainable Development Goals path was shown since the city of Utrecht is one of the 100 SDG city’s in the world. The area will be further developed from a trade fair with large parking spaces into a new neighbourhood hosting more than 3000 flats.

Moreelsebrug
The tour continued over the Moreelsebrug, which crosses the railway tracks and is accessible for pedestrians but also includes a cycle path connecting the new and old centre of the city. It has been co-financed by the Rabobank, benefitting from a shortcut for their employees to the city and was built in a way that allows adding stairs onto the platforms of the station later.

World’s biggest cycling garage
The tour continued into the largest cycling garage in the world at Utrecht Centraal offering 12.500 spots for bicycles including spaces for oddly shaped bikes and a bike repair shop. The group had several questions regarding the check-in procedure, rental options and measures to prevent unused bicycles from obstructing the space. It could be observed that the entrances to the parking garage were just renewed even though the facility was just opened a few years ago, which was due to accidents happening there. The willingness of evaluating the situation, accepting a mistake and immediately implementing a new solution to allow for high accessibility and safety for cyclists and pedestrians was at the forefront of the group’s interest.

Marga Klompébrug
The next stop was on the Marga Klompebrug crossing the Singel, which is now filled with water again, but was once a highway during the 70s and up until the 90s when Utrecht was developing into a car-oriented city. The group was impressed by the large-scale interventions that happened around the central station which were supported by pictures of the previous situation being displayed across the area. The Singel is not only a popular space to walk and relax but also serves as an overflow for draining the roads in case of heavy rains, therefore protecting the city from flooding and extreme weather events.

Busiest cycling intersection
After passing through the historic centre of Utrecht along the Oudegracht, which became a major means of transport again especially for goods including the delivery to restaurants but also waste collection, the tour continued via the Lange Viestraat. The tour then concluded at the central station with short stops at the intersection where cyclists drive diagonally across and the busiest cycling intersection next to the Smakkelaarsveld. It was a dense program in which the delegation got to see different urban developments, mainly focusing on mobility, across Utrecht and learned about the changes that were made to make the city more liveable and accessible. A number of ideas along with approaches on how to implement and finance these urban transitions could be returned home to Hannover. 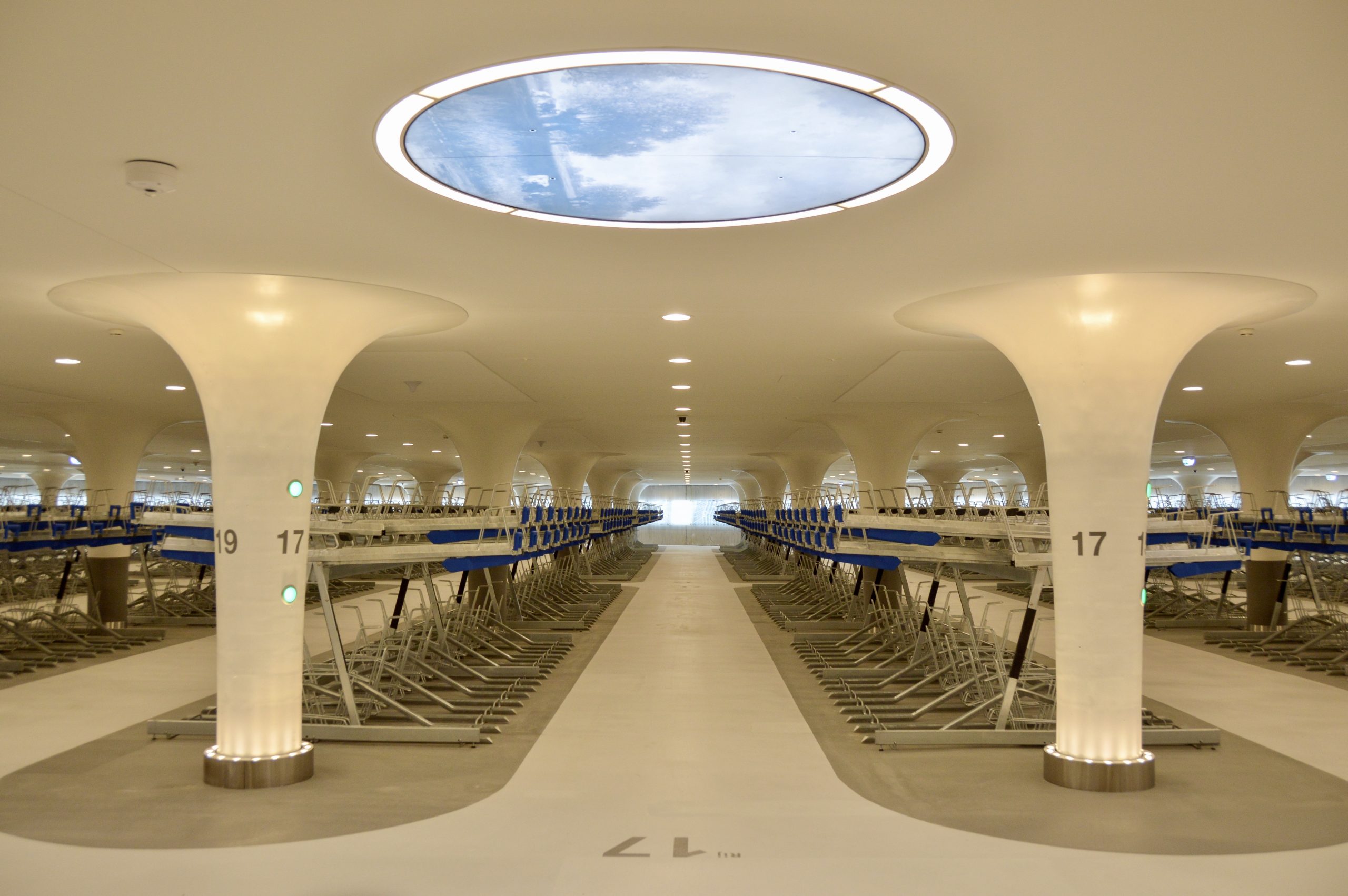