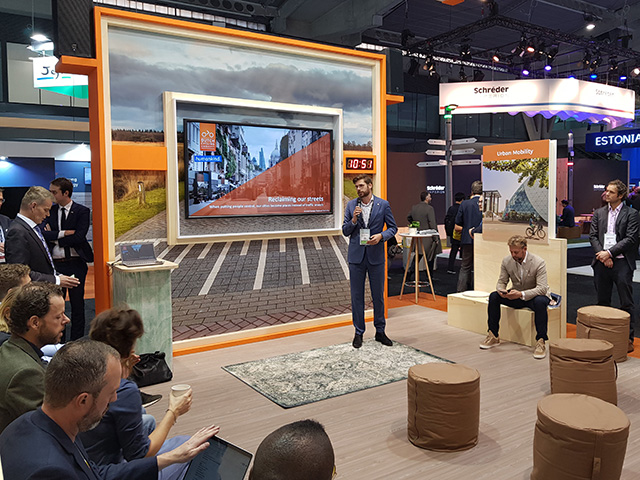 Last week, the Dutch Cycling Embassy and Humankind participated in the Smart City Expo World Congress in Barcelona as part of a larger trade mission with over 200 organizations from the Netherlands.

This event, which in particular focuses on ‘smart’ technologies for everyday life, is one of the leading expositions on ‘smart cities’ in this field worldwide. However, most of organizations exposing and sharing business ideas at this event tend to overlook the citizen in the equation, and try to find problems to solve with technology.

During a brief pitch we shared our vision that a smart city already exists in many places, in particular in Dutch cities. A smart city is not fully equipped with all kinds of sensors, technologies, sensors, lights, and charging infrastructure. It is not a city that manages to let cars drive with shorter distances between each and every one of them due to 5G, it does not consist primarily of smart traffic lights, trash bins, and so on.

A smart city is a city that focuses on people and creating places where people like to be. Places which are not jammed with (parked) cars, but places that facilitate active mobility, where cycling can be a reasonable and safe mode of transport, where the city is planned in a clever way in order to reduce the distance between facilities such as shops, sport parks, and schools.

Funnily enough, such a city would tackle all of the problems in an inclusive and equitable way, without the need for technology to improve air quality, safety, public health, et cetera. We need to be aware that we don’t get absorbed by our desire to innovate and miss the most simple solutions as a result.