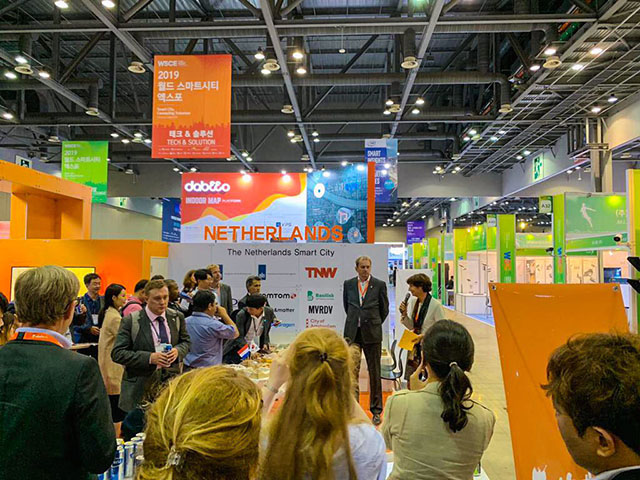 As many new cities are being built, and existing ones are being improved with a strong focus on innovation, there are serious opportunities for smart investments, including cycling. Making cities more sustainable and healthy is very much part of the equation, which translates into a (renewed) interest in improving cycling conditions.

Dutch Cycling Embassy Director Lucas Harms was present at an orange-colored ‘Holland’ Pavilion at the World Smart Cities Expo in Seoul, where he introduced himself to Korean Prime Minister Lee-Nak-yeon. He also had the opportunity to meet with delegates from the World Bank, and to meet and greet with the new ambassador representing the Netherlands in South Korea: Ms Joanne Doornewaard. She is a cycling enthusiast and will help us connect our expert network with stakeholders in South Korea (and other Asian countries).

Lucas also had productive meetings with representatives of an NGO focusing on sustainable transportation, the Korean Cycling Federation, and Korean research institutes. They all would like our help with improving cycling conditions in Korea, including the ambitious plans for building a so-called Cycling Rapid Transportation-network in Seoul.