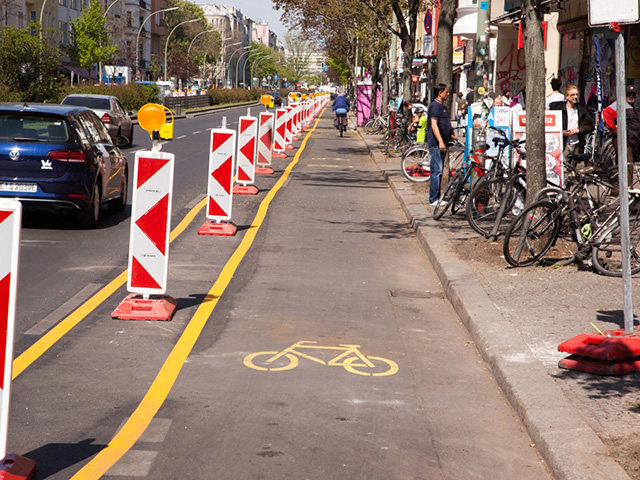 Dutch experts did shine a light on all kinds of issues around the theme: “Learning from the Netherlands: moving from Pop-up to Permanent Cycling Infrastructure”. With help of Allgemeiner Deutcher Fahrrad-Club (ADFC), we reached over 400 attendees during the various digital sessions.

Thanks to the German Federal Climate Plan, German municipalities and regions will have millions of euros at their disposal for improving cycling infrastructure in the years ahead. The financial resources of the Bundesregierung and the practical experience of the Dutch can significantly accelerate the so-called ‘Verkehrswende’ in Germany – if the momentum is used and investments are made wisely.

The first four webinars which were scheduled on Thursdays in the summer months of July and August, all had a specific focus and theme. In every edition, the theme was first introduced by director of the Dutch Cycling Embassy, Lucas Harms, and a presentation was given by at least two experts from Dutch organisations to inform attendees and share knowledge about the theme. Dagmar Köhler from the Deutsches Institut für Urbanistik, moderated the sessions and effectively translated Dutch experiences to the German context.

A final over-arching session was scheduled on September 24th (here you can view the recording of the session), in which various topics from the summer series were highlighted, and the most frequently asked questions were discussed in detail. Most attention was given to the design of safe intersections and attractive bicycle network, with additional presentations by Paul Schepers (SWOV) and Manuel Klomp (ICAF). In two rounds of subsequent panel discussions with Dutch and German experts from previous sessions, a lot of questions from the participants have been answered. Finally, Pex Langenberg (Dutch Embassy in Berlin) underlined the importance of knowledge transfer and collaboration between the Netherlands and Germany.