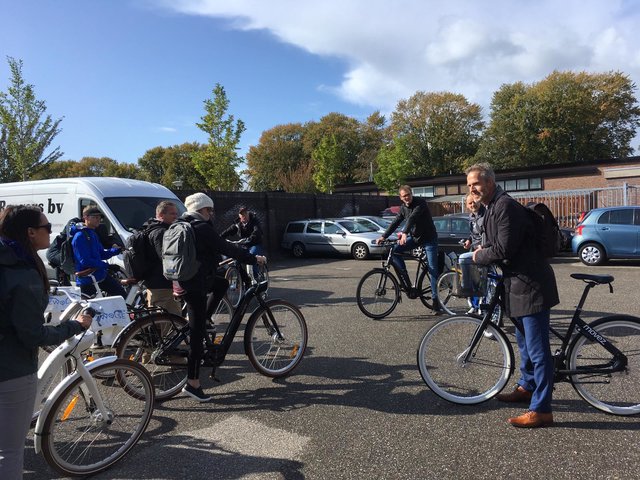 A delegation of 17 people from Arkansas walked and cycled through Zwolle.

The American organization PeopleForBikes brought a delegation from Arkansas to the Netherlands to learn about the Dutch cycling vision. After a visit to Delft the day before, Wednesday they were received in Zwolle, a city in the middle east of the Netherlands and a network participant of the Dutch Cycling Embassy. This city boasts one of the highest mode shares in the country: almost 50% of the movements in Zwolle are made by bicycle. In 2014, the Fietsersbond (Dutch Cyclists’ Union) crowned this city the Fietsstad (“Cycling City”) of the Netherlands.

After the group arrived, a guide from Zwolle gave them a walking tour to City Hall. There, different representatives of the municipality explained everything about the city’s cycling vision to the group of 17 people interested in cycling. After that, Bernhard Ensink of our participant Mobycon taught them about bicycle implementation. His most important message was that, in order to have a bike-friendly city, you have to include the bicycle in everything: health, economy, and infrastructure.

After a lunch, each member of the delegation received a bike from ‘Zwolse deelfietsen’, a bike sharing system in the city. Representatives of Windesheim University, our participant TripleJoy and representatives of Zwolle guided them on a bike tour through the city. We even stopped at the cycling delivery service ‘Cycloon’, and the delegation tried the cargo bikes there – many of them for the first time.

The delegation thought the day was “amazing” and went back “with too much knowledge to process”.