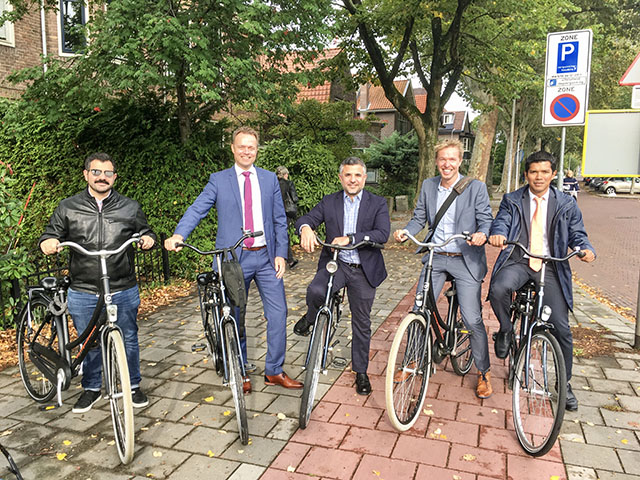 On Monday, September 23rd, 2019, the Dutch Cycling Embassy had the pleasure of welcoming Panama’s Minister of Public Works Rafael Sabonge to our office in Delft.

Mr. Sabonge, who was visiting the Netherlands for a two-day Water Management study tour, had previously met with the Dutch Cycling Embassy during our mission to Panama last month. This time around, our own Lucas Harms and Chris Bruntlett were able to return the favour, taking the Minister for a short, 3-kilometre bicycle tour of our home base of Delft.

The Minister viewed the impressive, 8,000-bicycle parking facility underneath Delft’s central train station, and then joined thousands of TU Delft students for their morning commute along the Schie Canal. The morning program concluded with a presentation and discussion at Dutch Cycling Embassy headquarters, where the Minister expressed interest in engaging our network for a pilot project that combines shared bicycles with Panama City’s growing metro system.

With the earlier launch of Panama’s new cycle network plan, entitled “Bici 2020”, we look forward to sharing our expertise with the Panamanian government.