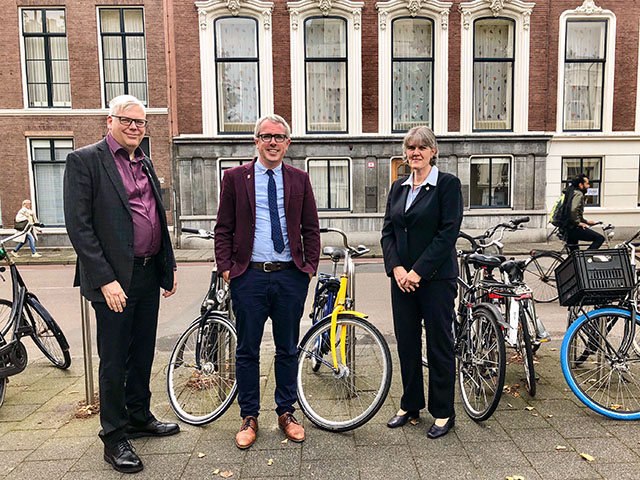 Ottawa and The Netherlands Grow Together

This week, the Dutch Cycling Embassy met with a trade delegation from the Canadian capital city of Ottawa.

This week, Ottawa Mayor Jim Watson is visiting the Netherlands on a trade mission, leading a 20-person delegation from the transportation, tourism, and technology sectors of Canada’s capital, in order to strengthen the already close business ties between the two nations.

As the birthplace of Princess Margriet and home of the Canadian Tulip Festival, Ottawa holds a special relationship with the Netherlands, that began with liberation from German occupation—in which Canadian troops played a pivotal role—precisely 75 years ago.

Over the course of the week, Mayor Watson’s delegation will connect with partners in The Hague, Eindhoven, Rotterdam, and Amsterdam. This included a Monday afternoon meeting with the Dutch Cycling Embassy in The Hague, where Marketing and Communication Manager Chris Bruntlett sat down with the City of Ottawa’s General Manager of Planning, Infrastructure, and Economic Development Stephen Willis, Economic Development Officer Jamie Hurst, and the Embassy of Canada’s Trade Commissioner Judith Baguley.

Our presentation was very well-received by the group, who promises to involve their Transportation Planning team upon their return to Ottawa. In addition to a possible online seminar and workshop, there were discussions about engaging the Dutch Cycling Embassy’s network in the development of their (in-progress) Transportation Master Plan, for which the City has set ambitious targets to increase sustainable modes of transport. Given the launch of their brand new light rail system this past weekend, they were particularly interested in how the Dutch excel at combining bicycles and trains into a seamless mobility network.

The evening was marked by a reception and dinner for 125 invited guests at the Louwman Museum in The Hague, which included addresses by Mayor Watson, Canadian Ambassador to the Netherlands Sabine Nölke, and Ottawa Tourism President & CEO Michael Crockatt.

We look forward to helping Ottawa achieve their lofty goal of enabling “cycling for everyone”, and continuing to build on those 75 years of cooperation and friendship.

For a photo gallery of the evening’s reception and dinner, please click here.