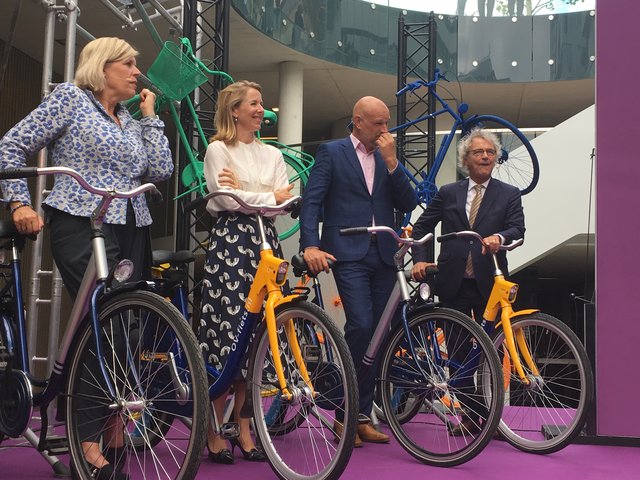 The NS, ProRail & the city of Utrecht officially opened the biggest bike parking in the world.

The parking facility offers parking spaces for 12.500 bicycles at the Stationsplein in Utrecht, under the central railway station.

The parking already had 7500 parking places, but on its busiest days, this still wasn’t enough to facilitate all the bicycle users at the railway station in Utrecht. That is why NS, ProRail and Utrecht built a second part that augmented the capacity of this parking to 12.500 bicycles, spread over three floors. Their representatives and the state secretary of infrastructure and water, Stientje van Veldhoven, opened this new part Monday the 19th of august by cycling on bicycles in front of the entrance.

The parking facility will be open 24 hours a day, 7 days a week. Electric signs will tell its users in which path they parked their bicycle so they can find it back easily. The first 24 hours people can park their bike for free and after that they pay € 1,25 per day.

With this parking, the government wants to facilitate the transport of the growing trainusers in Holland. This is one of the bullet points in the program Tour de Force where Dutch organisations and the government work together to strengthen cycling policy. Next to the opening of the parking, Stientje van Veldhoven announced that Holland would propose the Dutch bicycling culture for the national list of intangible heritage.