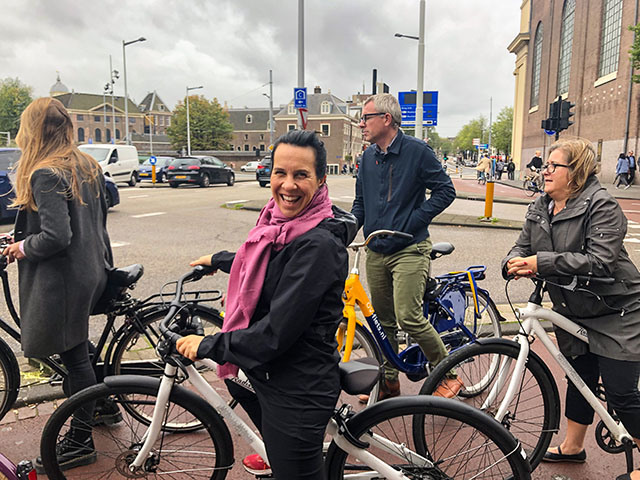 Mayor Plante—who was visiting Amsterdam to attend the World AI Summit, en route to the C40 World Mayors Summit in Copenhagen—approached the Dutch Cycling Embassy about experiencing Amsterdam’s famous cycling infrastructure and culture. We were more than happy to oblige, and after a short coffee where we introduced our expert network and international mandate, her delegation—which included Chief of Staff Marie-Eve Gagnon and Director of Economic Development Véronique Doucet—took to the streets of Amsterdam.

Highlights of the five kilometre bike ride included Jodenbreestraat—the site of the freeway fight that changed the course of the city’s history—and Alexanderplein—a busy intersection where City engineers had removed the traffic lights, with positive results. Needless to say, Mayor Plante was amazed by what she observed, and appeared disappointed when the tour came to a close. We hope this eye-opening experience inspires and invigorates her push to improve conditions for cyclists on the streets of Montréal, which already boasts one of the oldest and largest networks of physically separated bike lanes in North America.