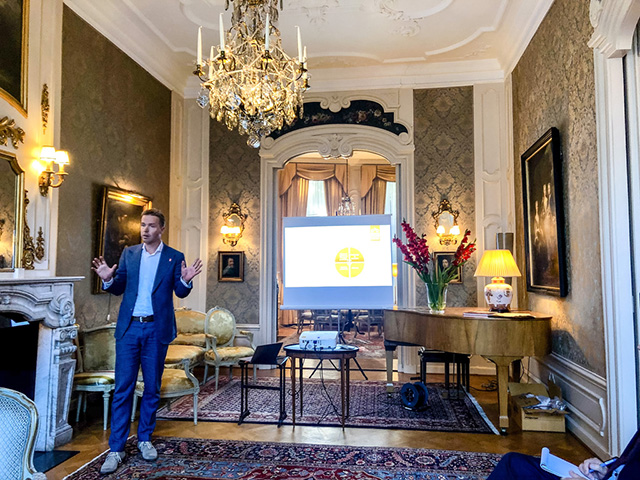 DCE meets with parliamentarian from the Swedish Committee on Infrastructure, Ms. Maria Stockhaus.

On the morning of Thursday, October 7th, the Dutch Cycling Embassy met with a parliamentarian from the Swedish Committee on Infrastructure: Ms. Maria Stockhaus. Ms. Stockhaus was visiting the Netherlands to study, among other things, the bicycle infrastructure in Dutch cities. The meeting, which took place at the residence of the Swedish Ambassador in The Hague, also involved three members of the Dutch Cycling Embassy network: Roel Lenoir of 3pm, Dirk van Amelsfort of Goudappel, and Adrian Puentes of Beccan Davila+Puentes Urbanismo. After short presentations from Dutch Cycling Embassy Managing Director Lucas Harms and each of the three participants, the floor was opened for a lengthy discussion about the concepts presented, and their applications to the Swedish context. Ms. Stockhaus was particularly interested in the financial policies recently implemented by the Netherlands national government to stimulate employees to cycle to work. We hope to see similar “easy-win” measures introduce in Sweden in the near future!