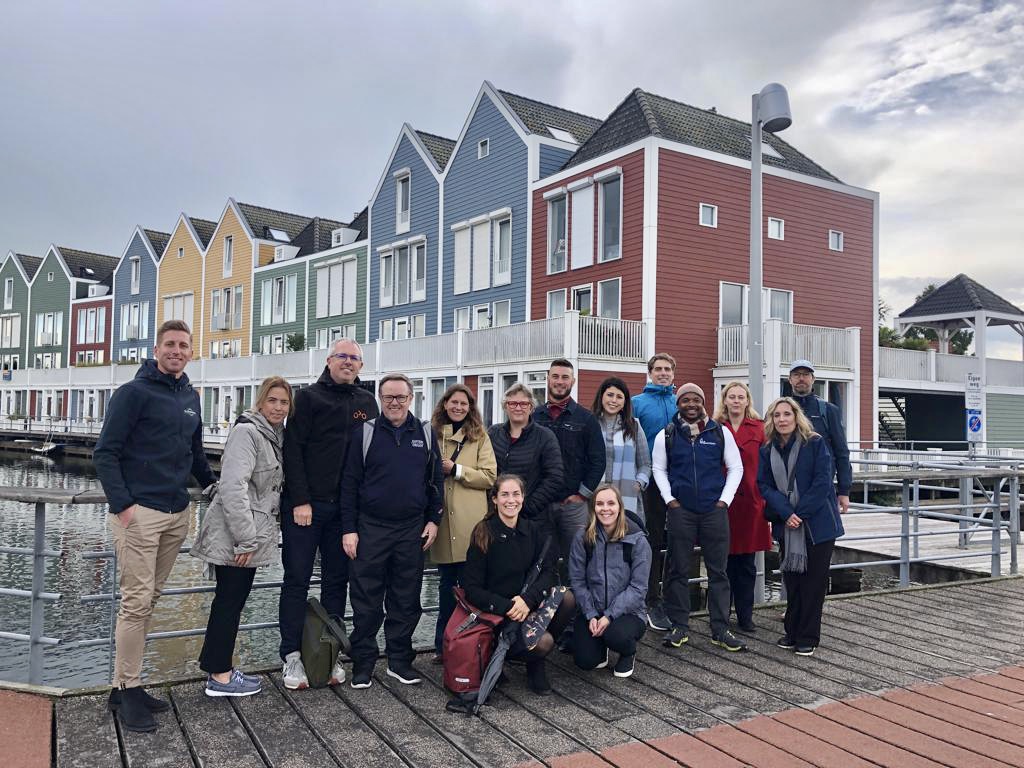 From September 28-30th, 2022, on behalf of the Ministry of Infrastructure and Water Management, the Netherlands Embassy in Washington, DC, and the Netherlands Enterprise Agency (RVO), the Dutch Cycling Embassy facilitated the program of a three-day Urban Mobility Study Tour to the Netherlands for eight high-level delegates travelling from the United States. In attendance were:

The past two years have not always been easy. During the pandemic, we were hardly able to meet in person, let alone travel across continents. Additionally, the pandemic has changed the landscape when it comes to urban mobility. Many areas have seen a big increase in the demand for cycling, leading to shortages of (e-)bikes. At the same time, many cities saw a decrease in the use of public transport.The Netherlands and the United States have a long-standing relationship of sharing knowledge and working together on policy themes such as sustainable mobility.

During the three-day study tour the delegation travelled to a variety of municipalities in the Netherlands, including Utrecht, Houten, Rotterdam, The Hague, Nijmegen and Lent.

Day #1: Utrecht – Houten
Utrecht is the lively, beating heart of the Netherlands. It was built around the Dom tower, which can be seen from any point in the city. In this way you cannot get lost in the attractive, car-low city center.

The Study Visit kicked-off with an interactive breakfast session defining main learning objectives of the Study Visit hosted by the Dutch Cycling Embassy. Thereafter, the delegation collectively walked towards the City Hall where the Mayor of Utrecht, Sharon Dijkstra, welcomed the delegation while having a spectacular view over the city. Erlijn Mulder continued the introduction to Utrecht by diving into future developments of the city related to mobility, climate, and most of all liveable places.

After admiring the view from the 21st level of the City hall. Richard ter Avest (Goudappel) welcomed the delegation in the central hall, just besides the maquettes of the city. Here, Richard introduced the Dutch approach on multi-modality, first- and last-mile solutions, the bike-train combination, including the OV-fiets, and, the transformative change of Utrecht’s inner city highways to one, a through route active travel, and second back into a channel. The walkshop included visits of the bicycle parking facilities surrounding Utrecht central station as well as a visit to the Netherlands’ busiest bicycle path.

After the walkshop, the delegation enjoyed a free trip -due to Utrecht’s Mobility week- riding along tramline 21 in the direction of Stadion Galgenwaard. At the station the enthusiast and very knowledgeable team of SportUtrecht (i.e. Laurens Hitman, Jelle Bakker, and Nander Zuidema) welcomed the delegation. While watching the grass of the soccer field of FC Utrecht being maintained the delegation received a presentation on the variety of projects which SportUtrecht is executing, among others supporting school in learning children to ride a bicycle, children from all ages and all physical and/or mental abilities, as well as learning adult to ride a bicycle.

After a typical Dutch lunch and listing about among other cycling for a full morning, the group eagerly jumped on e-bikes experiencing the Dutch cycling infrastructure firsthand. Dutch Cycling Embassy’s Marketing and Communication Manager Chris Bruntlett guided the delegation from the stadium towards the bike-friendly municipality Houten. The delegation was impressed, not only due to its fine-meshed bicycle infrastructure but also by the Dutch urban planning, countryside and attractive housing. From Houten the delegation easily travelled back by train, the first day was a wrap!

Day #2: Rotterdam – The Hague
Rotterdam is a city of many faces: a tough port city, a trendy nightlife city, a sophisticated shopping city and a hip artistic city. Maurits Lopes Cardozo (BikeMinded) met the delegation at Rotterdam Central station and changed their towards his orange colored cycling guide outfit, with the main reason of being visible while touring in the busy center of Rotterdam, just after rush hour. Maurits toured the group within 2 hours to a variety of neighborhoods in Rotterdam and showing the city projects Hofplein as well as the Coolsingel. Maurits did a fabulous job on showing and experiencing Rotterdam’s highlights.

To experience a variety of modes of transport, the delegation travelled by water-taxi towards the Kop van Zuid. After a relaxing dinner the group traveled with the Metro Line E from downtown city center of Rotterdam directly and smoothly to the heart of The Hague.

In the Hague the delegation was welcomed by the Ministry of Infrastructure and Water Management. Mirjam Borsboom facilitated the session with a variety of speakers, among others Arlette van Gilst the head of the Active travel team of the Ministry, and Kees van Ommeren, the head of the Sustainable Mobility department of the Ministry. Monique Verhoef Alliance manager at the Ministry shared her tips and tricks about setting up a cycling ambassadors’ network. This interactive presentation sparked many questions from the delegation. Additionally, one of the cycling ambassadors, Leander Witjes of the National police, shared his experiences and his ambitions for the years to come.

The day was closed off by a reception where the delegation had the chance to meet a variety of organization from the cycling field.

Day #3: Nijmegen – Lent
The fortified city of Nijmegen, the Netherlands oldest city, will make you think you have gone back to Roman times. The delegation began their final day with a discussion on the concluding main objectives for their city tour. This discussion initiated the conversation on the meaning of accessibility for cyclists in the US.

Once in Nijmegen, the group was welcomed at the medieval City Hall facilitated by Jasper Meekes. Martijn te Lintelo (Regio Arnhem-Nijmegen) was first to present to the group, introducing the topic of regional bike policy and bicycle highways cycling safety. Questions arose on the topics of cycling safety data and how to bring these elements to a US perspective. The second presentation was given by Lennart Nout and Babet Hendriks (Mobycon), focusing on network planning and cycle highways, including safe and protected intersections, traffic calming and retrofitting.

After the presentations, the group was introduced to two of the Region of Arnhem-Nijmegen’s Aldermen Cilia Daemen and Johan Sluiter who were joining the cycling tour. The tour through Nijmegen showed the eager group the Dutch designed roundabouts, the “bicycle streets” where the cars are guests, bike parking around the neighborhood train stations, and the Snelbinder bridge over the Waal River to get to Lent. Further exploring the neighborhoods in Lent, the group observed the design of the residential areas with regards to cycling lanes. The group witnessed how simple and safe it was for families to go grocery shopping on their bikes or for children to cycle from their homes to their schools.

The final day of the study visit was closed off with a reflection of the last few days where the group thought about whether they had met their personal goals and what the next steps would be after they returned home to the United States.