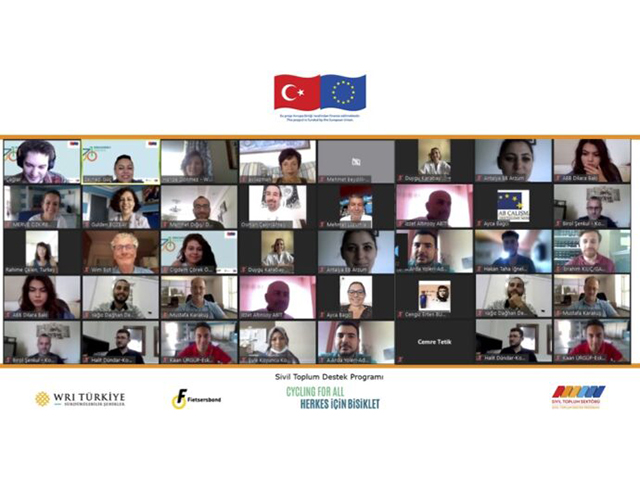 Helping Create ‘Cycling for All’ in Turkey

Written by Wim Bot and originally published on the Fietsersbond website (in Dutch).

The contact was established during a visit of the WRI to the Netherlands in 2019, organized by the Dutch Cycling Embassy. There I gave a presentation on the history of the Fietsersbond, the cooperation with governments and the creation of the Tour de Force as a unique coalition of governments and civil society organizations around a common agenda. From that visit to the Netherlands, the Cycling for All project eventually emerged, with the Fietsersbond as a partner. It takes place within the Civil Society Support Program of the Directorate for EU Affairs and is funded by the EU.

During the kick-off meeting, I discussed the origins of Dutch cycling policy and the role of the Fietsersbond in it. Dutch cycling policy has a special “orgware”, a collaboration between governments and civil society organizations. The Tour de Force with its shared cycling agenda for the medium term is the most recent example of this. The Dutch Cycling Embassy also fits into that collaborative picture. The Fietsersbond was and is an important player in that whole field since 1975.

The capacity building workshop, under the professional guidance of the WRI, dealt with issues such as mission, citizenship, objectives, problem analysis, stakeholder analysis, lobbying, coalitions, networking and advocacy. The bicycle activists from the cities were all very enthusiastic, but also indicated that they encountered many problems and reluctance. It is clear that the differences between the cities are also large: for example, front runner Konya has a master plan for cycling and a cycling department in the municipality; the cycling organization in Izmir has already organized a critical mass 130 times and Kayseri is still at the beginning. From the rich experience of the Fietsersbond, we were able to provide feedback, which was very much appreciated. For example, we emphasized the importance of a strong national organization and the role that cycling mayors can play.

After the summer we, the Fietsersbond, will advise on the local action plans and comment on the final products.