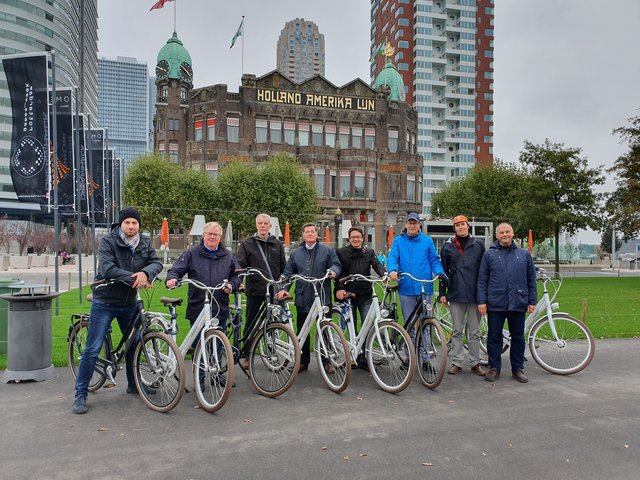 After talks from the Dutch Cycling Embassy and City of Rotterdam, Bike-Minded guided them through the city.

Germany wants to invest in more infrastructure for bicycles. That’s why 10 members of their national parliament – of the political parties CDU/CSU, SPD, afD, FDP, DIE LINKE, BÜNDIS 90/DIE GRÜNEN – travelled to the Netherlands to see how our bicycle infrastructure is built and financed.

They visited our participant the City of Rotterdam, where Deputy Mayor Judith Bokhove welcomed them at City Hall. Dutch Cycling Embassy Director Lucas Harms first presented the Dutch Cycling Vision to the delegation. “They were mainly interested in the unique Dutch combination of bike and train, the emergence of the e-bike, and the finances.” Harms answered all of their questions, and referred also to Tour de Force, the national cycling agenda that aims to increase bicycle kilometers by 20% in 2027.

Various people from the City of Rotterdam spoke to the parliament members about zero-emission transport, policy to promote sustainability, and the new Mobility City Campus. They also guided the delegation through the Central Station of Rotterdam. Afterwards, Maurits Lopes Cardozo of our participant Bike-Minded gave them a great tour through the city.

After their visit to Rotterdam, they travelled further to the municipality of Utrecht, which is another of our participants. We wish them a pleasant trip!