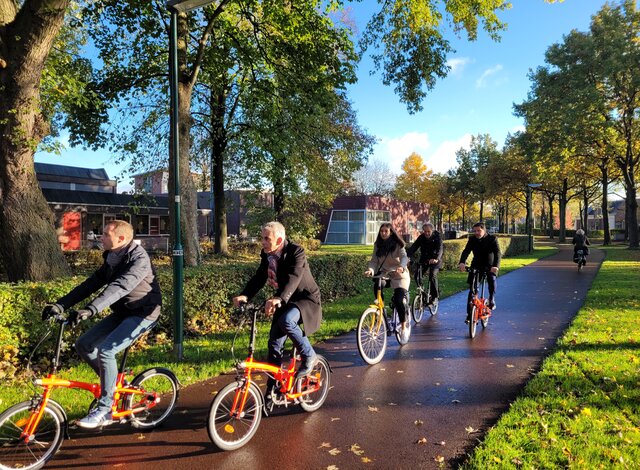 DCE leads a French delegation into the cycling culture of Houten, Utrecht, and ‘s-Hertogenbosch.

In an effort to boost bicycle policies and infrastructure in the Ardenne Metropole region, a government delegation visited the Netherlands last 4, and 5 of November. The delegation included mayors from various municipalities and members of Ma Ville à Vélo 08 association.

On the first day, we spoke about cycling policies while having lunch. After lunch, there was a presentation by Stephen Kurz from Mobycon learning about the history of Houten and the problems they have faced with the gas crisis and the high number of kids accidents with automobiles, furthermore learning about the design of Houten with circulation and cauliflower neighbourhoods. The day ended with a bicycle tour also led by Stephen Kurz of Houten where we had first-hand experience of Houten bicycle paths and traffic circulation plan.

On the second day, we joined the Fietsersbond (the Cyclists’ Union) in Utrecht, where Max Mooij gave a presentation about commuting by bicycle and how to get businesses to cycle more. After lunch, we were joined by Ton Kooymans, the owner of Street Stuff; Ton Presented about bicycle parking solutions and issues the Netherlands still faces with space for bicycle parking. Finally, finishing the day off with a walking tour of bicycle parking in ‘s-Hertogenbosch. We look forward to keeping working with them on their future cycling projects!