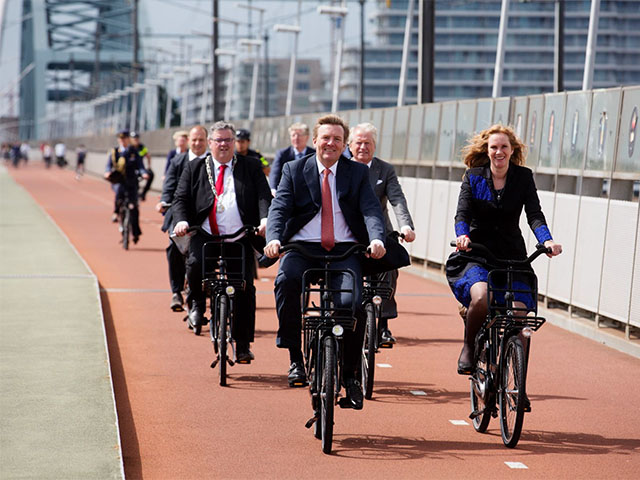 New report estimates the social export value of Dutch cycling is between 1.2 and 3.8 billion Euros per year.

The Netherlands’ international role model in the field of cycling is worth its weight in gold: annually more than one billion Euro in social benefits.
Spreading our example is the most cost-effective way of reducing CO2 emissions.

Commissioned by Tour de Force, Decisio has investigated the social export value of cycling. This is estimated at 1.2 to 3.8 billion Euros per year. Of which 5 to 55 million euro in CO2 savings. On top of that comes the important image and diplomatic value and the economic value: annually, bicycle-related exports amount to between 2.1 and 2.7 billion Euro.

There is hardly a city in the world that is not busy promoting cycling. For those cities, the example set by the Netherlands and the lessons learned in the past are of great importance, as the Decisio study shows. Many countries look to the Netherlands, and many foreign mobility professionals do not understand why the Netherlands does not do much more to export our cycling knowledge.

The research results show how important it is to propagate the Dutch example much more actively. In the interest of our economy, our climate, our international image and in the interest of inhabitants of cities abroad.

The report can be downloaded in Dutch and in English.