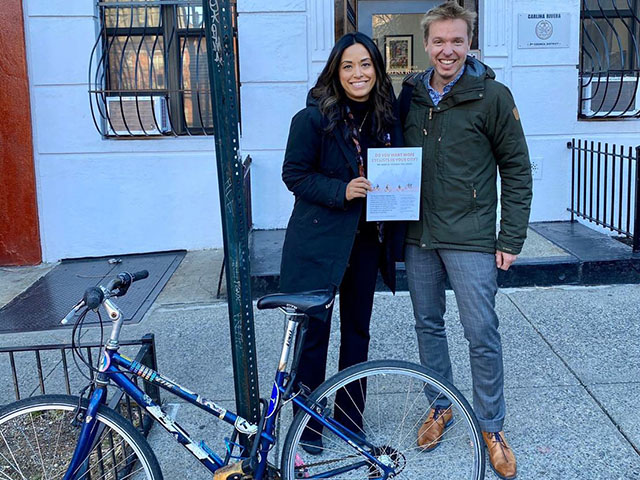 Last week, Dutch Cycling Embassy Director Lucas Harms represented our organisation at at the 99th Annual Meeting of the Transportation Research Board (TRB) in Washington, DC. In addition to sitting on their Standing Committee on Bicycle Transportation, he screened a number of inspiring short films at the TRB Theatre, including several entries from BicycleDutch, and Streetfilms’ newest spotlight on Utrecht.

Before departing Washington, DC, he met with Claudia Adriazola and Sergio Avelleda at the WRI Ross Center for Sustainable Cities—part of the World Resources Institute—to explore opportunities for collaboration.

From there, Lucas headed to New York City, where he sat down with Jorden Splinter and Carter Craft from the Netherlands’ Consulate General, brainstorming ideas for bringing Dutch cycling expertise to the region.

His second day was spent meeting with the ‘bike team’ at the NYC Department of Transportation, to discuss the current state of cycling affairs. A great deal has been accomplished, but further progress is feasible: from daring cyclists to enabling them, and now (hopefully) creating more inviting environments.

After that, he met with staff of the Metropolitan Transportation Authority (MTA), discussing the potential of cycling as an access and egress mode for the New York suburban transit and subway systems, and looking at various bike parking solutions. One of the highlights was meeting Council Member Carlina Rivera, who is pushing forward to improve cycling conditions for everyone in New York City!

We look forward to a possible return visit in the summer, where we will look to expand the Dutch Cycling Embassy’s influence in that region.