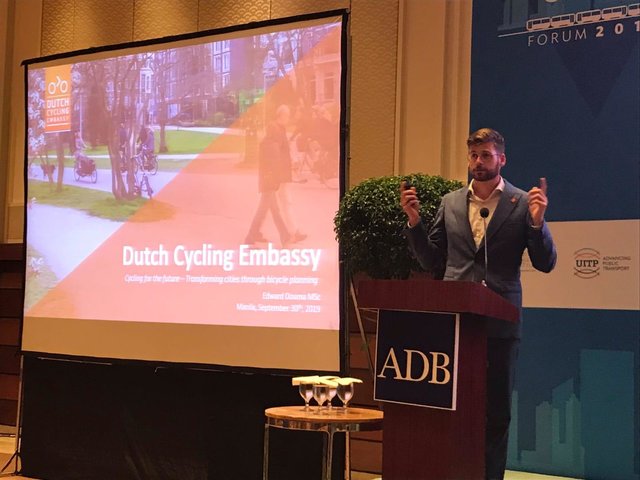 Dutch Cycling Embassy in the Philippines

The Dutch Cycling Embassy kicks-off Philippines program with a talk at the Asian Development Bank in Manilla.

The Dutch Cycling Embassy is in the Philippines after a request from the embassy of the Netherlands. “Residents of the Philippines spend as much as eight hours per day on the road in motorized vehicles. Our embassy received increasing signals that there is significand demand for alternate means of transport. We see the bike as one of those means. You see them more and more here in daily life, but we can do more to make the bike a safe, sustainable means of transportation,” says Kevin Punzalan, Senior Policy Officer at the Embassy of the Netherlands in the Philippines.

DCE’s Edward Douma is present with DCE member Lior Steinberg of the designing- and planning agency Humankind. The Dutch architect Neville Mars will also join the mission; he is known for designing Schiphol Airport and the Rotterdam Central station.

The program starts with a presentation and training about cycling policy by Edward Douma in the Asian Development Bank at the 30th of September during the Urban Transport for Livable Cities Forum. “They defined sustainable city development as one of their objectives for the coming years. This focus results in extra budget from the ADB for cycling related projects. Considering the leading position of the Netherlands in cycling, it is essential to bring Dutch knowledge and expertise to the attention of the ADB,” says Douma.

The Dutch Cycling Embassy will also present the Dutch Cycling Vision at the Road and Traffic Congress in Manilla at the 1st and 2nd of October. Following this, the experts, the Embassy of the Netherlands, Bambikes and the Bakunawa Art Foundation will meet on Friday the 4th of October with the Intramuros Administration, which governs the heritage district of the historic center of Manilla. They hope to discuss subjects like bicycle parking design.

Monday the 7th of October the Dutch delegation will continue to Iloilo City where city officials, CSOs and companies will join a bike tour around the city to discuss local situations and watch the film “Why We Cycle” about the Dutch cyclingculture and discuss this afterwards. Tuesday, the Dutch experts and locals do a ThinkBike workshop where they discuss the local situations while keeping the Dutch vision. The visit closes on Wednesday the 9th of October with a high-level meeting with the Governor of Iloilo province and the Mayor of Iloilo City, along with the Dutch Ambassador.