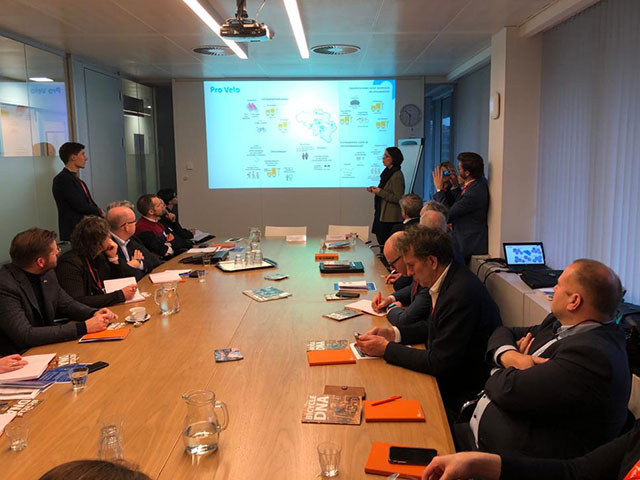 From January 12th-14th, Dutch cycling experts joined the trade mission headed by Minister Sigid Kaag of the Ministry of Foreign Trade to Belgium.

As cycling is currently strongly developing in Belgium and given the proximity of Belgium for Dutch experts, it was a no-brainer to join the mission and exchange knowledge and ideas on cycling. DCE participants 3pm, TripleJoy, Falco, Street Stuff!, Armada Mobility, and The Urban Future joined the mission, together with Edward from the DCE staff. Besides the business delegation, also experts from the Ministry of Infrastructure and Water Management joined to exchange ideas with Belgian counterparts.

The mission kick-off took place in Brussels with general introductions, keynotes from officials and matchmaking. The main element for the cycling delegation was the round-table about cycling, where Cecile Rousselot from Pro Velo shared the latest about cycling in Wallonia and Brussels, and Wout Baert from Fietsberaad Vlaanderen shared more about the situation for cyclists in Flanders. Arlette van Gilst and Mirjam Borsboom concluded the session with a presentation about cycling promotion from the Dutch national perspective. During the afternoon, the mission headed for Antwerp where it visited a number of places under development, a networking reception and a dinner at the residence of the Consul General.

The energy with which cycling is being approached in parts of Belgium is astounding, with impressive results in terms of infrastructure and campaigns. Although Wallonia lacks behind in terms of modal share, the overall increase in the use of the bicycle is promising!