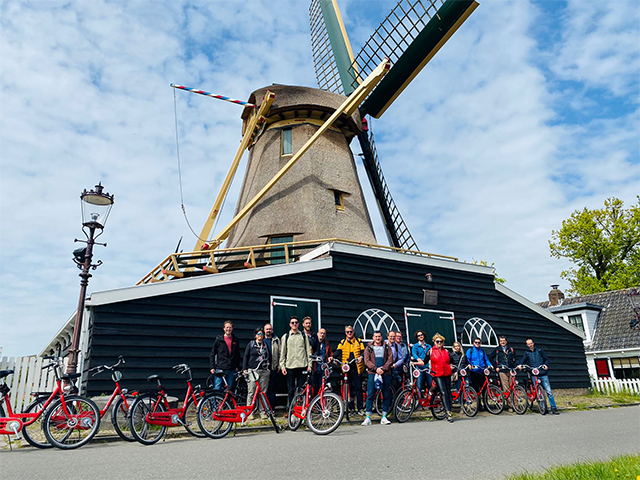 A mixed group of mayors and civil servants from all over Hungary visited the Netherlands on early May 2022.

The first day started with a welcome at the DCE office by Nout Ramaekers, Project Manager at the DCE. Where after André Pettinga (Cyclemotions) introduced the group to cycling in Utrecht by an interactive presentation follow-up by experiencing cycling in Utrecht firsthand. Throughout the cycling tour André discussed how the Municipality of Utrecht continues to improve the facilitation of active travel. Among others by visiting the Merwedekanaalzone where an industrial area will be transformed into an urban district with a focus on healthy, sustainable and green living.

On the second day of the visit, the Hungarian group visited Nijmegen. With presentations from Anne Heustenenk (Royal HaskoningDHV) and Ruben Loendersloot (Loendersloot Consultancy), we discussed the hardware, software and orgware of cycling. After the presentations, the group got on their bikes to discover Nijmegen and the cycle highways that connect the city to suburbs and nearby cities.

During the last day of the visit in Amsterdam, the group experienced the development of the city from the mid-20th century till now. From a car dominant city in a few neighbourhoods to a heaven for cyclists and pedestrians, as was told by Dick van Veen, Sanne van Zundert (Arup) and Marjolein de Lange (Amsterdam Bike City). After two hours of presentations, the developments discussed were made visible during a bicycle tour through the centre and Amsterdam Noord, where the surprise was great about the quiet parts of the city, so close to the tourist centre.