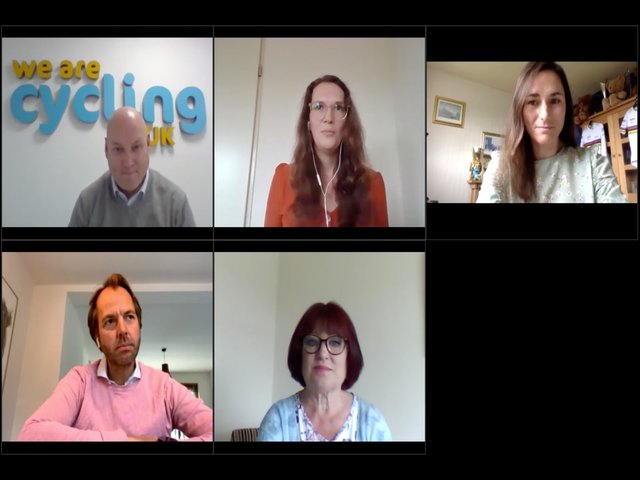 This June, the DCE co-organized a series of free webinars together with Cycling UK.

The corona crisis has caused cycling to boom across the United Kingdom, as 1.3 million Brits bought a bike during lockdown, and cities across the country have rushed to create networks of pop-up bicycle infrastructure. But how do they ensure it becomes “the new normal” in post-pandemic Britain?

Throughout the month of June, the Dutch Cycling Embassy partnered with Cycling UK and the Embassy of the Kingdom of the Netherlands in the UK on a series of four free webinars open to all. These webinars covered topics from both a British and Dutch perspective, including behaviour change, political leadership, workplace incentives, and the role of cycling in decarbonising transport.

They featured a number of experts from the DCE network, including Mirjam Borsboom from the Ministry of Infrastructure, Lior Steinberg of Humankind, Paul Hoffschult of 3pm, Anne Marthe Javingh of Royal HaskoningDHV, Erik Tetteroo of APPM, and Jose Besselink of the City of Rotterdam.

We were pleased by the positive response and constructive dialogue, and hope to continue providing guidance to the UK, as they head into what Prime Minister Boris Johnson has declared “a new golden age for cycling”; preparing to invest an amazing £2-billion in active travel over the next few years.