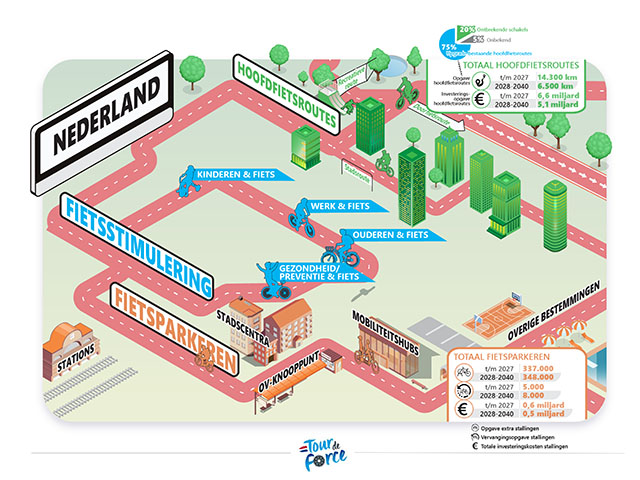 A National Vision for the Future of Cycling

The future for the bicycle: three levels of government continue to build the Netherlands as a cycling nation.

Fast and safe cycling throughout the country. With good bicycle parking facilities at convenient locations, where you can transfer to bus, train, streetcar or car. So that everyone in the Netherlands can get to work or school on time and easily by bicycle and the bicycle is an attractive option in addition to the car and public transport. With this ambition, municipalities, provinces, transport regions and the national government, united in the cooperative bicycle association Tour de Force, today present the National Vision of the Future of Cycling (in Dutch). The plan contains a first inventory of possible investments in cycling throughout the Netherlands in the coming years. State secretary Van Veldhoven (IenW) and Henk Brink (chairman Tour de Force) have just presented the plan.

Exploiting the potential of the bicycle

Secretary of State Van Veldhoven: “I think it’s great that we as the Netherlands’ cycling nation want to move forward together. Despite the fact that many bicycle journeys to work have fallen by the wayside, we have started cycling more in corona times. Cycling is in our DNA. And the advantages are obvious: cyclists are sick less often, take up little space on the road, and keep the air clean. In the coming years, many houses will be built in our country, often in the city center. The bicycle is then an ideal option, but this too requires investment. It is therefore a very good thing that all parties are together putting their shoulders to the wheel to better utilize the potential of the bicycle.”

This picture of the future is an outline. Local authorities, provinces and transport regions have spent the past few months listing the possibilities for their regions to create a national network of main cycling routes with good bicycle parking facilities. This has resulted in an initial inventory, which lists several billion euros worth of possible investments. This initial rough list of possible measures for the construction of missing links in a national main cycle route network amounts to one billion Euros up to and including 2025. In the near future, the parties involved will be working together to determine which measures have the greatest potential and which have the highest priority. In the autumn, they expect to present a more detailed vision of the future of cycling, as a basis for future investment decisions. The primary responsibility for many bicycle investments lies with municipalities, provinces and transport regions. As far as the national government is concerned, decisions are of course up to the next cabinet.

Henk Brink, chairman of the Tour de Force in which 23 parties work together on the future of the bicycle: “I am proud of this collaboration of public authorities and other cycling parties. We now have a clear picture of where the challenges lie. We are ready for it and must get to work to accelerate investments in cycling together.”

Zwolle as a good example

Brink and Van Veldhoven presented the main features of the Idea of the Future this afternoon in Zwolle. Earlier this afternoon, Van Veldhoven opened the new bicycle parking facility in Zwolle. This bicycle parking facility makes Zwolle an example of a station of the future, where travellers can quickly transfer and where the bicycle is easily incorporated into the trip.

Bicycle in our DNA

The bicycle is as Dutch as cheese, tulips and the Elfstedentocht. The Dutch collectively cycle around the world 440,000 times each year, and we have more bikes than people. Bicycles from the Netherlands are sold worldwide. Almost half of car trips are currently shorter than 7.5 kilometers, and with electric bicycles longer distances are becoming more and more attainable.