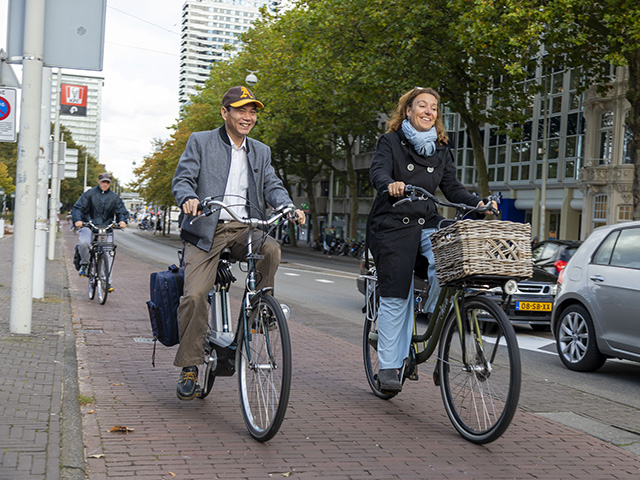 DCE and Municipality of The Hague leads 40 foreign ambassadors on guided bicycle tour of The Hague.

On the afternoon of Thursday, October 7th, 2021, the Dutch Cycling Embassy lead around 40 foreign ambassadors—including representatives from the United Kingdom, New Zealand, Switzerland, Sweden, Rwanda, Chile, Lebanon, Nepal, Vietnam, United Arab Emirates, the Philippines, and Brazil—on a guided bicycle tour of The Hague, to illustrate first-hand its dramatic journey from car dominance to cycling city. The tour included an opening and closing reception at the spectacular bicycle parking garage at Den Haag Centraal Station, which—with space for 8,500 bicycles—is the second largest facility in the Netherlands.

The opening reception featured presentations from The Hague’s Head of Mobility David van Keulen, the Netherlands’ State Secretary Steven van Weyenberg, and the Dutch Cycling Embassy’s Managing Director Lucas Harms. From there, the ambassadors divided into small groups and took to the streets of The Hague; cycling a five-kilometre loop that highlighted the city’s best traffic calmed streets, separated cycle tracks, and secure parking facilities.

Intended to introduce embassies to the success of the Netherlands as a cycling nation, and how it might be translated to their own context, the event was organised in cooperation with the Municipality of The Hague and made possible by the Ministry of Foreign Affairs and the Ministry of Infrastructure and Water Management, as well as Take a Brake Den Haag.

For a complete photo gallery from this event, please click here.