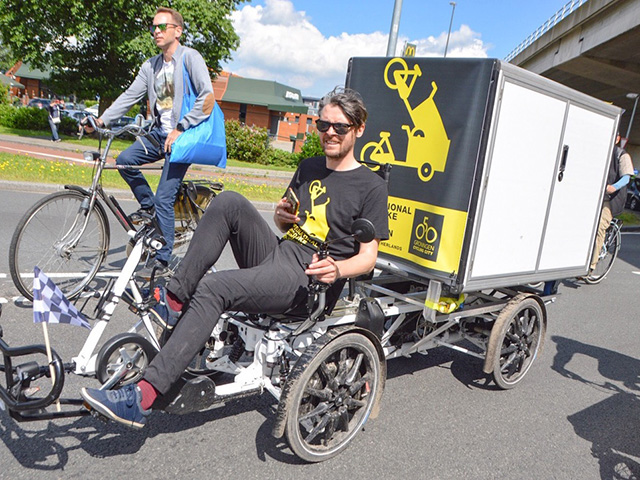 This past weekend, hundreds of cargo bike users, designers, manufacturers, and retailers descended on Groningen for the 2019 International Cargo Bike Festival (ICBF). Started by Fietsdiensten.nl‘s Jos Sluijsmans in 2012 as an informal gathering of like-minded industry people, the ICBF has grown to include exhibitors and attendees from 35 countries around the world, including Colombia, Hong Kong, South Korea, the United States, and Canada.

As part of the City of Groningen’s ambitious plan to make all city centre logistics completely emissions-free within the next six years, they hosted the 8th annual iteration of the ICBF on the industrial grounds of the old Suiker Unie (“Sugar Union”) Factory in the west side of the city.

The three-day event began on Friday with a conference entitled “Delivering Happiness: Unboxing the Potential of Cargo Bikes”, which welcomed professionals working in the cycle logistics industry. It included an opening address by Groningen Vice Mayor Philip Broeksma, and keynotes by Karl Reiter from the University of Vienna, Alfred Kazemier from the City of Groningen, and Lior Steinberg and Eva van Breugel of DCE network participant Humankind.

Humankind also hosted a half-day “City Summit” on Saturday, that saw politicians and policy makers from across Europe gather to share knowledge and discuss the specific challenges and successes experienced while implementing cycle logistics programs in their cities.

The next two days featured a cargo bike exhibition that was open to the public, and included DCE members such as 4Wieler and Cargoroo. A number of cargo-bike themed events took place, including a races and a “bakfiets parade” that saw several hundred bikes of all shapes, sizes, and budgets roll around the streets of Groningen.

It was exciting to see how far the simple bakfiets has come over the past few years, from a niche novelty to a seriously efficient way of transporting people and goods around the city. We look forward to attending next year’s festival when the 2020 host city is announced!